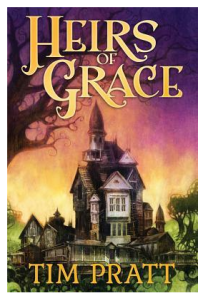 This book started out fun and interesting and ended up not much of either. A good, basic plot of a young woman, Bekah, adopted as a baby who receives a mysterious inheritance from an unknown family member. A large part of the inheritance is a sprawling country house in the middle of nowhere and filled with stuff, some of it magical.  Throw in a handsome lawyer, a strange neighbor, something ominous in the woods, other unknown family members, and someone trying to kill Bekah and where could it possibly go wrong?

With Bekah, it went wrong with Bekah. While Pratt did a pretty good job of writing a female main character there was occasionally something just slightly off in her words or thoughts, just enough to pull me slightly out of the story. Trey, the lawyer, was mildly attractive but never seemed even after the geas was severed to rise to anything more than being the attractive nice guy at her beck and call.

I had two problems with this book, the first being Bekah’s reluctance to kill the homicidal Firstborn. here was someone who started out being more in control of her magic than Bekah and therefore more powerful who is shown to have no qualms about killing or trying to kill anyone in her way. Bekah does gain more power and learns, slowly, that she might be more powerful than the Firstborn. So how does Bekah decide to handle the situation? She talks to her, that’s right, she talks. No, just no.

I can’t quite swallow the reasoning of talking to a powerful, psychotic, murdering creature and asking her to leave Bekah and her friends and family alone, call me crazy but that just doesn’t seem smart. Just getting close enough for talking doesn’t seem smart. Getting just close enough to kill her seems reasonable. A nice big magical fight between two females for control of the magic left to Bekah would have been a great climax, instead we got something else with talking.

But that wasn’t the end and that’s where I had my second problem with this book. Pratt gave us a far too long wrap up Bekah’s life after the not so big climax. It lacked much of a point and just sort of felt like one of those overly long Christmas letters from a not very interesting branch of the family.

I liked Heirs of Grace but it could have been a much better book if the two main characters had been more fully developed, they were just a little too pallidly reasonable. while Heirs did not make me click the buy now button on Pratt’s other books it didn’t make me run screaming away from them. I liked it, it did not suck.