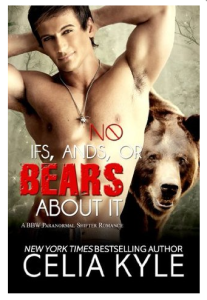 While I didn’t hate this book, I certainly didn’t love it. It sounded rather good and I wanted to read a bear shifter book. I should have kept looking because this never rose above mediocre at best, there were far too many illogical actions used to cobble this story together.

I didn’t like either of the main characters much. Mia, our snowflake, is 1/4 bear and can’t shift. Ty, the idiot, is leader or Itan of the local bear clan. Basically, Mia inherits her grandfather’s house and moves to a small town with a large werebear population and meets Ty, local Itan and officer of the law. Insta love, a runaway cub, and skullduggery ensue.

It sounded interesting, except for the Insta Love. It would have been except that Mia is soooo much more than she seems or knows about. And who does know this? Her Daddy, who lets her move to Beartown without telling her What She Needs To Know.  Because he hopes she won’t meet a bear and it won’t be a problem except that what he didn’t tell her pretty much guarantees she will be meeting one or more bears. Hell, they should be stacked up like wood outside her front door- and back door, under the windows, around the flowerbeds- you get the idea, right?

But nooooo, Daddy never bothers to tell her and doesn’t tell her much about bears in general. Daddy suffers from Male Stupidity Syndrome.  “More than anything, I don’t want the ugliness of the werebear world to touch you, Mia. This thing with Griss… It’s ugly. I want you wrapped in a bubble, protected from anything that could upset you.” And this is after he’s acknowledged that Mia is indeed the Itana. I’m thinking she might have to deal with a little ugly now and then – best start now.

But if you didn’t want her upset and involved then why didn’t you, oh never mind, this is a book and stupidity sometimes runs rampant. And speaking of rampant stupidity, let’s talk about Our Idiot, er, Hero, Our Hero.

He’s one of those doesn’t take no for an answer guys where his mate is concerned and like her Daddy wants to keep all the bad stuff a secret so she won’t have to exercise any adult reasoning. After hustling her and the cub off to his den, he then proceeds to try to be just like her dear old Daddy and hide every fricking thing that he thinks she doesn’t need to know all the while proclaiming her his “Itana”.

Ty’s an annoying dumba$$, even when he’s admitting he handled their relationship badly he can’t quite bring himself to admit all his wrong decisions. “Well, there were probably other annoying things he’d done to pi$$ her off, but the little stuff didn’t seem bad enough to walk out over.” Bzzt. Wrong, bearboy, there was plenty of “little” stuff to justify making you a statement piece on the lodge floor but not to worry, you’re not done being stupid.

“She seemed to be telling him “no” all the time, but it hadn’t made a difference yet.” Sigh.

“She was just overreacting a little. They’d talk, she’d understand…”  Well, how very- well, darn, this review is going on Amazon so I can’t use those words but I’m pretty sure you can figure out the ones I mean.

He’s so busy maneuvering Mia into his den and trying to get her in his bed that asking her a simple question like what did she mean about her bloodline or taking a minute to wonder how a non-shifting quarter bear could keep up with him in a flat out run, “Later, he’d be smug about the fact that his human mate kept up with him. ” Not wondering why, you understand, because this bear has all the intellectual depth of a pancake.

“It wouldn’t matter in the end. He was sure he could shuffle her alongside him once again, By the time he was done, she would be begging him for his mark.” Charming, and you have to be wondering about Mia, who thinks this guy is hawt.

Mia shows a little promise – she wants to protect the cub, Parker, from his murderous family and she finds some of how the bear clans function as strange, and she does get angry with Ty whenever she catches him lying or withholding information from her. But in the end she chooses Ty, so very little promise.

Mia thinks she and Ty might be meant to be together then 5 sentences later she is thinking abt when she returns to her home with Parker then 3 sentences later she thinks maybe she’ll move home with her father so Parker will have a father figure. Because a cub needs a woman’s influence and he might pick up unspecified bad habits from Ty, the man she’s attracted to and wants to sleep with and who keeps calling her his itana, and his brothers. Huh?

But the bad decision making doesn’t end, no, it keeps spreading.  Even a female werebear gets in on the action drugging Mia. “”She had a good reason. Your Itan doesn’t think anything bad about her actions, so you’re not allowed to get angry. ” He harrumped, and she knew that tone, knew he believed every word he’d said and that last bit had been an order.” So. Much. Wrong. Here. But the wrong just keeps on coming, “Yes, thinking back on the panic she’d felt at hearing the Cutler Itan arrived was overwhelming. The only choice available at that point was physically knocking her out or drugging her. She’d been too scared to think clearly.”

I can think of two, no, three other ways to handle her and if she’s too much of a special snowflake that she can’t get a grip and handle a situation affecting her new clan then maybe she shouldn’t be thinking about how Ty shouldn’t keep things from her. But I guess it’s not the same if you tell her after she wakes up from being drugged.

“Mia took a step toward the cage, glaring at him, hoping he suffered under the weight of her anger.” Really. He doesn’t know you, has no use for you, and is a miserable POS. And you are such a bada$$ that the thought of his early arrival had everyone, including you, justifying drugging you Just a few short paragraphs ago. Tell me why he would give a carp about your anger?

And once again Ty has ordered his bears to not let Mia do something (visit granddad). And after the big confrontation where he promises to change they are still keeping things from her but seeing how she reacts to certain decisions I’m not entirely sure that keeping her in happy ignorance isn’t the best way to handle her.

The worldbuilding is shaky. One of the main points of conflict is that the bears really didn’t want this non-shifting half-breed bear as their Itana because she won’t have babies that can shift and the position of Itan is handed down from father werebear to son werebear, shifters all. But the answer to that is right in front of them but bears don’t ask questions outside of their clans. So this allows not only Mia’s acceptance to be in danger but also allows Parker to be in mortal danger because bears don’t ask questions about new bears joining their clan(s). It is seen by some as a sign of weakness, more like a sign of bad plotting.  They do have a DNA database of members to ID dead bears if others ask, conclusion: it’s ok to ask about the dead but not the living who might just, you know, be making other bears dead. C’mon. No wonder the werebear population isn’t that big.

Once everything was resolved I was left with an inept plot and two main characters who deserved each other. But if you like Alphas and bears and aren’t too picky about a solid plot, it might work for you.