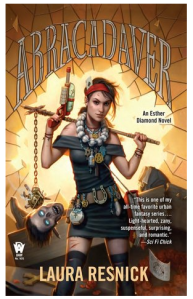 I enjoy a new Esther Diamond book, she’s a more competent but still hilariously calamitous paranormal Stephanie Plum. In her 7th outing Esther’s career and bank account look promising as she is offered more television work as Jilly Cnote but her love life looks abysmal as the handsome but close-minded Lopez can’t see beyond the normal.

Abracadaver picks up immediately after The Misfortune Cookie with Esther, Max, Lucky, Nelli, Lopez and his new partner, Quinn, trying to wrap up the loose ends.

While Esther might not know a lot about the paranormal beings she encounters it never stops her from trying to keep her friends safe and helping Max and Nelli to the best of her ability. She might get hurt, and not only physically, but Esther never lets that stop her from doing what needs to be done.

I think this is her best book to date, fast paced, frightening in parts, snappy dialogue, and Resnick’s ability to flesh out her characters and let them evolve is excellent. It looks like Esther and friends might have a new believer or two and Esther might have a new love interest. I hope so because the one thing that is wearing a trifle too thin is Lopez’ stubborn refusal to see what’s really going on.

He’s getting to be too high maintenance and Esther deserves someone who doesn’t think she’s one French fry short of a Happy Meal. And maybe, just maybe, she’s met that someone.

Seven books in and Resnick and Esther haven’t disappointed me, they are both worth your time and your money.