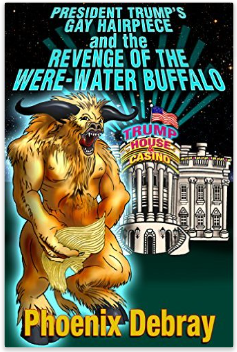 What happens when Donald Trump is elected president? Aside from the inevitable Trumping of America, the president gets himself abducted by a were-water buffalo bent on revenge for the deaths of his were-brothers thanks to Trump’s insatiable appetite for wigs. Trump enlists the aid of action movie star—and reluctant object of the president’s desire—Dwayne “The Rock” Johnson. Trump’s gay hairpiece Maurice just wants to go back to the way things were, when he was the one feeding the oblivious billionaire president his best ideas. But nothing can ever be the same after this fateful night of hardcore humping.

Warning: This is a work of satire that is rude and irreverent. It also has a lot of butt stuff. If you are sensitive (like the author), you are likely to be grossed out by how turned on you get by how offended you are.– Description on Amazon

And then Debray added in Dwayne Johnson. NO. NO. NO. Just leave Dwayne alone, the poor guy is starring in the  Baywatch movie. This  was just cruel.

At the end of the far too long 55 pages we leave (with a big sigh of relief) the Donald dancing naked on tables in what used to be the White House but was now the Trump House and Casino because he’s the president.