Let’s file this under “bitch, please”.

On January 2 Jaid Black posted this on her FB page:

This was the first time in, well, quite  a while that she has mentioned EC. And when someone posted their regrets for the closing she had this to say:

“No longer worth it”? Not enough authors left that she wanted to not pay royalties to, I guess. And on a post about the sudden closing of All Romance Ebooks she offered up another excuse: 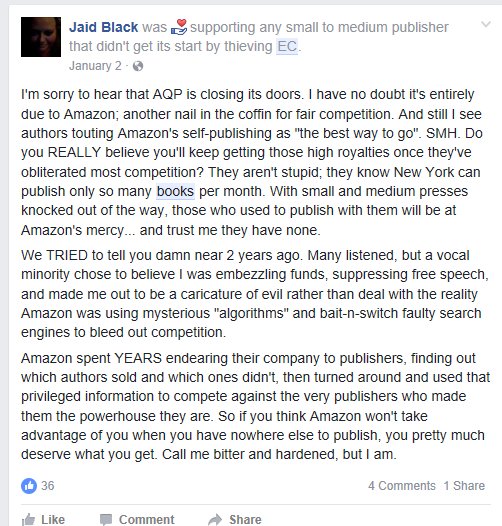 The “Amazon did it” excuse. Amazon did not not pay EC but EC sure as hell did not pay part of their authors. EC/Jaid Black/Patty Marks never seemed to understand that Amazon wasn’t going to roll over and give them special treatment because they thought they deserved it. Black played the victim for years.

And there were, and still are, plenty who think she is. Or maybe just a weak-minded, dull-witted, easily duped fragile flower.

Aaaannnnd Kevin Weinberg gets it wrong, so wrong, again. Oh, he never got paid but the reasons why were much different than he wants Redditors to believe. They had a falling out over politics for sure but Weinberg was stupid enough to tell her to her FB face that he knew better than she did about racial discrimination. (My sympathies were totally with Black on this one.)

So many retorts spring to mind. I do love the “We cannot continue to expend time on an endeavor that provides us with no income” line. Isn’t that what part of your authors were doing? They received no income, EC got the money, the authors got nothing but insults and accusations. I love that Black tries to herself in with the affected authors because we all know that if Amazon doesn’t correct this problem soon that Black/Marks/EC will be receiving money from Amazon and all those other authors won’t.