My friend, Gregor Xane, goes back to the barnyard in his new short story, Tipping. I hear it’s quite moo-ving, one way or the other. On sale on Amazon for $0.99.

“Little Wendy sneaks after her stepbrother and his buddies to spy on their top secret cow-tipping mission. She knows they’re going to take things too far, but doesn’t expect to come face-to-face with what it truly means to be human. ”

There are very few authors that can make me never want to see their work released but Gregor is one of them. Why, you ask, because Gregor is one of the best at promotion. His promos start months ahead and they are sly, subtle, hilarious, freaky, creepy,  entertaining, and appear when you least expect them. I don’t read horror but I look forward to Gregor’s promotions the way I look forward to the next Louise Penny release.

The gift-giving season is upon us, so I thought I’d put together a post with a bunch of book recommendations. Yes, I am a writer, but for this post, I’m a reader recommending books to other readers. And, yes, the stuff I’ve written and published so far, more or less, falls into the horror fiction category, but I figure most folks who visit this site on a regular basis don’t read much of that nastiness, so I decided not to highlight horror. Instead, these recommendations are from my reading outside of that genre.

I also want to make it clear, just in case the title of this piece wasn’t enough, that this post isn’t some sort of secret promotion for my author buddies. None of the books recommended below are by people I know. I’m plugging all of these books as an avid reader, not as a writer scratching the backs of my author pals.

One more thing before I get to the recommendations. Although these books aren’t horror, they may contain horrific elements and horrible things happening to nice people. But you’ll find that sort of thing in almost all genres.

Oh, and some of this stuff is fucking weird.

So, let’s get started.

After Dark, by Haruki Murakami – You’ve likely heard of Murakami’s 1Q84 and Kafka on the Shore. But the size of those books can be a bit intimidating, so I always recommend people start with this short work. If you like the flavor of this one, you’re safe to venture into his longer stuff. I find Murakami’s writing charming, compelling, and mysterious. Part of his appeal, to me, is that I have no idea how he achieves the effects he does. There’s a strange sort of magic at work here.

The Shadow Year, by Jeffrey Ford – In my introduction, I said I didn’t know any of the authors of the books represented here, so, in the interest of full disclosure, I feel the need to tell you that I did meet Jeffrey Ford once. I had him sign a book at a convention. We didn’t strike up a friendship or anything. I was nervous, got my book signed, and left him alone. Jeffrey Ford’s my favorite living author, and I went to this convention mainly to have a book signed by him. Anyway, The Shadow Year is a wonderful novel by Mr. Ford. It’s a coming-of-age story with a few supernatural accents. For example, the main character’s little sister seems to be unknowingly predicting crimes before they happen with the placement of clay figures in a replica of their town her older brothers have built in their basement. This book is funny and strange and makes me nostalgic for a place and time I never knew (1960s Long Island).

The Facts of Life, by Graham Joyce – This is a multi-generational family saga set in London in the aftermath of World War II. Joyce was a master of characterization. All of his characters seem drawn directly from life. This book won the World Fantasy Award for Best Novel, although the fantastical elements are quite subtle. A mother and a daughter just might have a touch of the old ESP.

Black Hat Jack, by Joe R. Lansdale – A rare western told from the perspective of an African-American cowboy. It’s got plenty of frank humor and shoot-outs and action and a bunch of gritty characters with attitudes true to the time period. Great stuff. Joe Lansdale is a national treasure.

Flicker, by Theodore Roszak – The premise of this book is pretty much the same as Marisha Pessl’s Night Film—a mystery surrounding a mysterious filmmaker who makes mysterious films—though this was written twentysomething years beforehand. I prefer this take on the premise over Pessl’s. This book is darker, richer, and has a much better, although similar, ending. I’m a sucker for stories in which the lone investigator, in search of a mysterious person or artifact, gets drawn into a dark, dangerous underworld.

The Man in My Basement, by Walter Mosley – A down-on-his-luck black guy is approached by a mysterious creepy white guy who offers to pay him a large sum of money if he agrees to keep said creepy white guy locked in a cage in his basement for a specific span of time. Oh, and he’s not allowed to tell anyone he’s got a creepy white guy locked up in a cage in his basement. Folks who’ve read Mosley’s detective fiction might be interested in giving this one a look to see another side of this fine writer. This would be a great one for some heated book club discussions.

Railsea, by China Miéville – I’d say this is a middle-grade book. Maybe YA? Shit, I don’t know what it is, but it’s good. Like all of Meiville’s adult books, his unique imagination is the main attraction. This one is essentially a retelling of Moby Dick but set in a world covered with train tracks. Here, the quarry is a giant, white burrowing mole, and our protagonists are chasing him down with a steam engine.

Children’s Hospital, by Chris Adrian – This is a literary novel that takes place during God’s second great flood. This time it’s not a giant boat that carries the only survivors, it’s a floating children’s hospital. This big peculiar thing has elements of science fiction, horror, absurdism, and religious allegory. The medical details are extensive but feel natural (not like research data dumps) and are somehow communicated in an almost poetic manner. An excellent novel that’s not for everyone but will reward those with a dark sense of humor, a bit of patience, and an open mind.

So, there you have it. This list gives you a good idea of the kind of thing I like to read, so if you’ve got some recommendations, feel free to send them my way. All I ask is that you don’t recommend anything you’ve written or anything written by anyone you know.

GREGOR XANE lives in southwestern Ohio. When he’s not typing, he can be found in his workshop building dangerous remote-controlled toys. He’s the author of the horror novellas SIX DEAD SPOTS, THE HANOVER BLOCK, LOVING THE GOAT, DOCTOR PROCLIVITY & PROFESSOR PROPENSITY, and the forthcoming BRIDES OF HANOVER BLOCK.

(The poor quality of the book covers is my fault not Gregor’s. Sorry, my laptop is being mean to me.)

It’s 2 Day! The Kindle edition of Bad Apples 2: Six Slices of Halloween Horror is now available (the paperback edition is right around the corner). Reach out and grab it, if you’re so inclined.

The minds behind the bestselling BAD APPLES: FIVE SLICES OF HALLOWEEN HORROR return this October with another batch of frightful fare. This time, they brought along a friend – Bram Stoker Award-winning author Kealan Patrick Burke!

Dive into the season with these six Halloween treats:

• Two boys enter a Halloween attraction that holds a devilish secret – but one of the boys has a surprise of his own in Edward Lorn’s HALLOWEEKEND.

• Halloween was his birthday, and all poor Bob Talley wanted was for his family to be together again. This year, his wish might come true amid whispers of CANDIE APPLE, from Evans Light.

• A deserter seeks to escape the horrors of war and pave a new existence in a foreign land in Jason Parent’s DIA DE LOS MUERTOS.

• Does something putrid truly reside in a small town’s pumpkin patch, or is it only a local legend? Find out in Adam Light’s TOMMY ROTTEN.

• An old man and his dog await Halloween visitors with candy and a shotgun in Kealan Patrick Burke’s THE ONE NIGHT OF THE YEAR.

To celebrate the imminent release of Bad Apples 2: Six Slices of Halloween Horror, the man at the helm of Corpus Press (Evans Light) is offering the original Bad Apples for just 99¢.

I believe this promotion is only going on for a couple of days, so if you’re at all interested, you may want to grab it while the grabbing’s good. 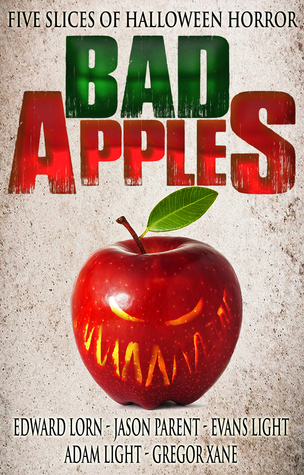 Crazy quilts are unique and innovative quilts created from scraps of material. They're crafted from odd pieces that don't always match or fit together without the work of an artist. My hope is for a world that values this unique artwork. I blog to make IPOC authors and their works more accessible, to make all the pieces fit together.